From the Vault - Joseph Hamm

From the Vault - Joseph Hamm

From McNair Scholar to Academia

As Joseph Hamm, Ph.D., ’08, takes the stage at the annual National Association for Court Management conference, the attendees are waiting for him to begin his discussion on people’s trust in government and the courts. Hamm specializes in understanding the relationship between government entities and the public, and his knowledge has led him to a career as assistant professor of Criminal Justice at Michigan State University, as well as a top researcher of environmental impact in the Michigan area. These endeavors have helped him address recent needs for researching trust in the government.

Hamm came to UNC in 2003, where a lecture from Professor Doug Woody inspired him to pursue the field of psychology and law. His sophomore year, Hamm was accepted into the McNair Scholars program, which was instrumental in helping him set goals and strive to reach his fullest potential.

“My time working with Doug and the McNair Scholars program were absolutely critical,” Hamm said. “I started undergrad not really thinking about graduate school at all and it was only because Professor Carl Granrud encouraged me to apply for McNair that it ever hit my radar. Without (Doug Woody’s) mentorship and the opportunities McNair offered, there is no way I would have made it into graduate school, much less a faculty position.”

The McNair Scholars program posthumously recognizes Dr. Ronald E. McNair after his passing in the tragedy of the Challenger space shuttle explosion. The program is designed to prepare undergraduates of either first-generation or underrepresented backgrounds for doctoral studies. 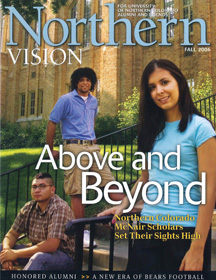 Joseph Hamm was first featured in the Fall 2006 issue of the university magazine, both on page 12 and on the cover.

Hamm’s inspiring career is proof that the program works. “I guess I just never really… considered myself someone who would ever be able to get a Ph.D. I spent most of my time in the program really just wanting to give it my best shot and see how far I could go, but never quite believing I could finish the program and get into graduate school. Impostor syndrome is real.”

At UNC, Hamm was a part of the Lambda Chi Alpha fraternity. “My fraternity had an annual fundraiser called Watermelon Bash. During one of the years, a brother of mine and I got to coach the Sigma Lambda Gamma’s team through a week of challenges and a day of games. We had the best time working with them … that was the year they ended up collecting the most money and donations and won overall.”

Building on the confidence the McNair program and his UNC experiences gave him, Hamm completed his doctoral degree in Law-Psychology at the University of Nebraska-Lincoln in 2014. Soon after, he accepted his position at MSU.

At MSU, Hamm has worked to continue his research and teach the intricacies of trust. His current work looks at issues of trust as they relate to the Flint water crisis, public engagement with the state courts, police body-worn cameras and adaptation to climate change. It’s a challenge he’s well-prepared to tackle.