From the Vault - Stephen Bidne

From the Vault - Stephen Bidne

Bidne discusses strategy with Hawai‘i golfer Sahara Washington at an invitational at the Kaneohe Klipper Golf course in Oahu. Photo by Jay Metzger

The rolling green grass and salt spray of a Hawai‘ian golf course isn’t an everyday occurrence for many golfers, but for Stephen Bidne it’s a familiar setting. Bidne, the head women’s golf coach at the University of Hawai‘i, graduated from UNC in 2011 with a degree in Business Administration.

As a student athlete on the UNC golf team, Bidne was a four-year letterman and received the title of Co-Newcomer of the Year in the 2007-08 America Sky Golf Conference. During his first year (in 2008), he tied a school record for lowest round, and he was named player of the year in 2010.

“Two days after graduating, I packed my bags and drove to Arizona to embark on my professional golf career,” Bidne says. “I went on to qualify for PGA Tour Canada, played on multiple other mini-tours throughout the U.S., and was fortunate enough to accumulate five professional wins and 13 other top-three finishes in my first two years.” 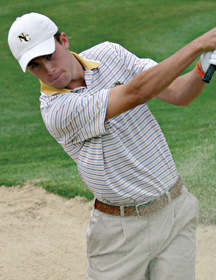 Bidne was featured in the fall 2008 edition of UNC’s alumni magazine, page 9.

While he was successful, he always had a passion for teaching the game of golf. When an opportunity to become UNC’s head women’s golf coach opened up, he knew it was meant to be and returned to Greeley in 2013. Throughout his time as UNC’s head coach, the team went on to break several school records, launching them from 224th in the country to 80th. “Looking back, I’m so proud of every single one of the players on those teams. They bought into the process and put such a positive fingerprint on the program.”

After four years as a coach at UNC, Bidne was offered his current position at the University of Hawai‘i. “Deciding to leave UNC was a difficult decision. It was a place not only where I’d spent eight years both as a student and as a coach, but it’s also where I met my wife Addison.”

After arriving in Hawai‘i in 2017, Bidne has seen his team go on to win both individual and team titles at the Anuenue Spring Break Invitational, as well as breaking several school records, namely the lowest team scoring average in a single season. Following the 2017-18 season, two players were given Big West All-Conference Honors, and Bidne was named the conference’s Coach of the Year.

“I’m extremely excited for the direction our program at the University of Hawai‘i is heading. We are a very young team with a lot of depth, and just like at UNC, I’ve challenged them to continue to lift the bar and take the program to new heights.”

No matter where golf takes him, he says he won’t forget the opportunities UNC gave him. “As the school mantra goes, ‘Once a Bear, always a Bear,’” he says. “Even though I might be wearing a different color polo on the golf course now, I’ll forever bleed blue and gold.”