After earning his UNC degree, he built a business, a dog food rendering plant in Fort Morgan, with annual sales of up to $4 million. Then he started running to help cope with stress. He found he had a body that could take punishment that would make most people blanch and made himself into one of the best adventure racers in the world.

“I’ve certainly backed off,” says Ulrich as he was mulling the Alaska race. “I don’t train nearly as much, unless it’s something like Badwater (a 135-mile race through Death Valley), where I need to really focus my training. What I’m doing is trying to extend the longevity of what I can do, and I feel better than ever.”

Other than a rotator cuff surgery last year, his body is doing well despite running close to 100,000 miles now — roughly the equivalent of crossing the United States 33 times.

“There’s a certain amount of suffering, and I guess I’ve become less tolerant of it,” Ulrich says. “I’ve lost some of that burning desire. I have to admit that. And yet I never really think I’ve done enough. So I’m trying to overcome that.”

His achievements aren’t limited to physical feats. The working title of his second book, Both Feet on the Ground, addresses the need to disconnect from technology and reconnect with nature.

“During that Death Valley circumvention, it was reconnecting with that solitude and peacefulness,” Ulrich says. “It’s hard to do that because we get so wrapped up in our gadgets.”

His sponsors tell him they hope he continues to do Badwater because they enjoy working with him. That made him think about the many others who may be inspired by his determination.

“It becomes more about other people,” Ulrich says. “I want to set a good example for others.” 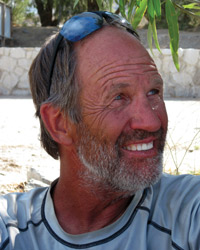 Considered one of the best adventure racers in the world, Ulrich:

Editor’s note: The magazine first featured Ulrich in the March 1991 issue in the article, “Pushing the Limits.”