Richard “Dick” E. Newman (BA ’66), Fayetteville, Ark., retired from the University of Arkansas, Fayetteville in 2014 after 42 years of teaching and coaching at the intercollegiate level.

Michael R. Lucas (BA ’73), Wasilla, Alaska, earned his second consecutive National Association of Flight Instructors Master Instructor accreditation. He has been a pilot in Alaska since 1985.

Ewin Michael Rosser (MA ’73), Aurora, was presented with the Colorado State University Lifetime Career Achievement Award given to alumni who have excelled in their business and civic careers. Mike has a long and prestigious career in mortgage banking, where he received numerous awards for his work.

Michael A. “Moe” Maiurro (BS ’79, MA ’81), Widefield, retired in 2011 from Fountain-Ft Carson SD #8 after 24 years teaching high school and coaching more than 50 different seasons of high school sports. Coach Moe is currently planning a 2,200 mile tribute bicycle ride from Fort Carson to Arlington National Cemetery. The cross country cycling journey, The 2016 Ride for Heroes, will begin May 1, and will honor three of his fallen former students who were killed in action in Iraq and Afghanistan.

Daniel W. Wong (Ph.D. ’87), Starkville, Miss., is a professor in the Department of Counseling, Educational Psychology and Foundations at Mississippi State University, where he served as department head from 2009 to 2014. He previously taught at the University of North Texas, San Jose State University, Hofstra University, University of Hawaii at Manoa, and East Carolina University. Recently, he published a book with his colleagues titled Counseling Individuals Through the Lifespan.

Scott Foster (BA ’99), Bayonne, N.J., starred as the man in the shower for the Dollar Shave Club ad that debuted during Super Bowl 50.

Megan Van De Hey (BA ’99), Denver, appeared in the production of Tell Me on a Sunday at the Avenue Theatre in Denver.

Janet Houser (PhD ’00), Arvada, was named Regis University’s provost. According to Regis University President John Fitzgibbons, “Janet is a leader who will help us navigate the many challenges and opportunities facing private institutions of higher education in the coming year.”

Aaron L. Young (BA ’06), New York, N.Y., and the current cast of Fiddler on the Roof went into the studio to produce a new revival cast recording for Fiddler.

Ryan C. Jesse (BA ’07), New York, N.Y., is currently in the national tour of Dirty Dancing, and recently appeared at the Buell Theatre in Denver. 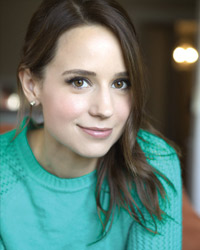 Hanna Marie Hines ’08 stars in Lifetime TV romance series
Hannah Marie Hines, a 2008 graduate of UNC’s Theatre Arts program, stars in the new Lifetime TV digital series Fall Into Me — Measurements. When a wardrobe assistant (Hines) shows up for work on a movie set, she doesn’t know that she’s about to take measurements for an A-list actor who also happens to be her childhood classmate — and crush. Will he remember her? Watch Hines in all eight episodes available as streaming video on YouTube.

Kimberly “Kimmy” DeRosa (BA ’09), Westminster, completed the master’s of Library Information Science degree at the University of Denver and accepted a position in technical services at the Auraria Library in Denver.

Stori Heleen (BA ’11), Littleton, is working at the Denver Center for the Performing Arts as a lighting designer in the Seawell Ballroom.

Daniel Everett Whisler (MM ’11), Satanta, Kan., is the 2015 winner of The American Prize in Conducting in the high school orchestra division for his work with the Youth Performing Arts School Philharmonia.

Anna M. Landy (BA ’14), Sayre, Pa., was cast in the Utah Shakespeare festival productions of the musicals The Coconuts and Mary Poppins.

Eric A. Vera (MA ’14), Brownsville, Texas, left his post as artistic director at Camille Playhouse to enter the Ph.D. Program in Public Practice and Theatre in the Department of Theatre and Dance at the University of Texas at Austin.

Phillip J. Foy (BS ’15), Otis, was commissioned as a second lieutenant in the United States Air Force on October 1, 2015.

Emily Johnson (BA ’15), Sammamish, Wash., was cast as Nancy in the TYA production of Fancy Nancy — The Musical at SecondStory Repertory in Seattle.

Cody McDavis (BS ‘15) was one of 10 people from across the country to receive a White House Champions of Change award for his contributions while at UNC and the “It’s on Us” national initiative to change college culture around sexual assault. Recipients were honored at an April 14 ceremony at the White House.