Robert “Inge” Ingebritson (BA ’58), Lewisville, Texas, cooked meals for the homeless for 28 years. That equates to almost 11,000 gallons of stew.

Lily Rosqueta Rosales (Ed.D ’59), Quezon City, Philippines, was honored by the Holy Child Colleges of Butan City during an international scientific forum and workshop with the launching of the Dr. Lily Rosqueta Rosales Scholarship Grant. The scholarship grant will be made available to those pursuing a master of arts in guidance.

Fred G. Waiss (BA ’72), Prairie Du Chien, Wisc., wrote a fantasy novel, Prophecy of Honor, published in June 2015 and will have another, Witchery, published in the fall of 2016. He also has a two-volume novel that takes place at UNC circa 1970 under consideration by a publisher.

Cynthia Gray (BA ’73), Fort Collins, produced and directed a film, Taking Flight that captures the unique innovation-driven, respect-oriented learning environment at The Logan School for Creative Learning, based in Denver.

Davalynn Spencer (BA ’77), Canon City, landed on two national bestseller lists with her latest novella, The Wrangler’s Woman in Barbour’s The Cowboy’s Bride collection. Named the number eight pick by Publisher’s Weekly in religious fiction for the week of April 11, 2016 and number five for April with the Evangelical Christian Publisher’s Association.

Michael Bierwiler (MA ’79), Bedford, Texas, released his eighth novel, Lies that Kill the Soul. It is the first time he personally translated his own work for publication in Spanish, Mentiras que matan el alma, and French, Mensonge qui tuent l’ame.

Captain Sully
Chesley B. “Sully” Sullenberger III, portrayed by Tom Hanks in the recently released film Sully, earned a master’s degree in Public Administration from UNC in 1980 — 29 years before he became internationally known as the “hero of the Hudson” for captaining a disabled commercial airliner during an emergency landing Jan. 15, 2009, on the river in Manhattan. All 155 aboard survived.

Jo Elizabeth Pinto (BS ’92), Brighton, saw her book titled, The Bright Side of Darkness, win in two categories of the 2016 Next Generation Independent Book Awards: Inspirational Fiction and First Novel Over 80,000 words.

Jill Ann (Vlasin) Adams (BA ’93), Fountain Valley, Calif., was chosen as Middle School Principal of the Year for the state of California.

Anissa Sue (Guzman) Buhring (BS ’93, MS ’01), Evans, earned a PhD in nursing from the University of Colorado Anschutz Medical Campus in May 2015. She is currently a UNC tenure track assistant professor in nursing.

Matthew Jockers (MA ’93), Lincoln, Neb., is an associate professor of English and associate dean for Research and Global Engagement in the College of Arts and Sciences at the University of Nebraska. 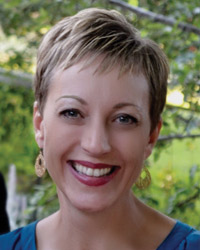 Alumna named Denver Center for the Performing Arts CEO
UNC political science alumna Janice Sinden (BA ’97) of Evergreen recently assumed the leadership role of president and CEO of the Denver Center for the Performing Arts, the nation’s largest non-profit theater organization. Sinden joins DCPA after five years as chief of staff to Denver Mayor Michael B. Hancock, a role with oversight of 11,000 city employees and a $1.5 billion budget. “I’m ready to grab the baton and join this incredible team as we run toward a common goal.”

Ryan J. McCoy (BA ’04, MA ’06), Westminster, was elected to serve as a school board director for Westminster Public Schools, the youngest person elected to the board.

Sonja Baker (BA ’11), Parker, is a certified advocate for people with disabilities.

Tyler Joseph Barnes (BME ’14), formerly of Pueblo, works in an Inuit community 33 miles above the Arctic Circle. His choir performed for the arrival of President Obama in September.