Bears in the Bands

This year’s Presidential Inauguration honoring newly elected President Joe Biden was historical on many fronts, from the inauguration of the country’s first female, first African American and first Asian American vice president, Kamala Harris, to its subdued setting and lack of crowds due to COVID-19.

Even though most Americans watched from a distance, three UNC alumni witnessed the event from the center of it, by performing during the celebration as part of three of the U.S. military’s renowned bands. Here, those alumni share their experiences from the day.

Rush is part of The United States Army Old Guard Fife and Drum Corps and plays the fife, a traditional instrument similar to the piccolo. She received her Bachelor of Music in 2014 from UNC.

“This year was really exciting for me in a lot of ways because of the current climate and the inauguration of the president and the first female vice president, Kamala Harris, so to me, that meant a lot to be part of the historic day, and it was also surreal because there was so much going on and a lot of fear of the unknown. But it ended up being an awesome day with nothing to worry about. It felt like America again, and it felt good to celebrate our democracy. I’ve only been in the corps for a year, so it was a really big event for me.” 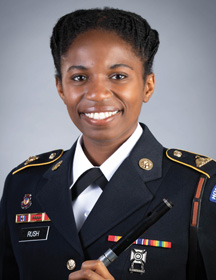 Disano is part of The President’s Own United States Marine Band and plays the clarinet. She received her Master of Music in 2013 from UNC.

“Every inaugural ceremony feels exciting because it is such an important part of our democracy, but for this Inauguration Day, there was one moment in particular that has really stuck with me in the weeks since. ‘The President’s Own’ United States Marine Band is always the first to play ‘Hail to the Chief’ and ‘Hail Columbia’ for the new president and vice president. This year as I was performing ‘Hail Columbia’ for Vice-President Harris, I realized that I was making history by performing that piece to honor a woman for the first time. That’s a memory that I will carry with me for the rest of my life.” 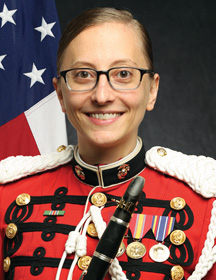 Basarich is part of The United States Army Band Pershing’s Own and plays the trumpet. He received his Bachelor of Music Education in 2013 from UNC.

“Pershing’s Own has been involved with inauguration since 1925, and being part of that legacy, but also the legacy of the peaceful transfer of power, bringing in a new president and honoring that office in that specific way, was really humbling and exciting. It was my first inauguration, and it was an awe-inspiring event to be a part of from a grandiose scale all the way down to how we rehearsed and what the traditions are.” 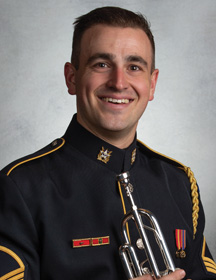