Jonathan Martin BA ’11 owns Black Sock Productions, a video company he founded after graduating from UNC. Martin and Ahmad Pasley, a formerly incarcerated playwright and poet, are now working together on Martin’s first feature film, The Confrontation Project. The film, featuring dialogue spoken completely in rhyme, is a breathtaking and thought-provoking exploration of the relationship between African American communities and law enforcement, examining the many hypocrisies and underlying creeds that drive behavior on both sides. Here’s more about The Confrontation Project as told by Martin. . 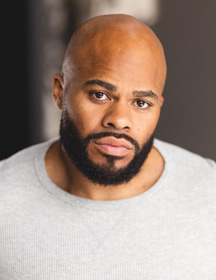 Last September, Ahmad reached out to me. It was only a few months after the riots that summer, George Floyd’s death and everything else, and I had become used to hearing that polarizing narrative, and hearing, as a Black man, that I was supposed to hate cops. But I have family that are cops. And here was Ahmad, a man with an interesting story, who had been in and out of prison throughout most of his life, saying we need both sides to do better. He definitely caught my attention.

The potential for this project quickly grew. I kept moving the goalposts. Once I got the full script and we started breaking it down, I realized it was a feature film, so we knew to make it, we needed money. For us, it is really about the message and getting that out so every audience has access to it. We shot a proof-of-concept trailer to put us in a better position to raise money and realized there was a lot of learning that was going to be involved. Because of what the material is and how important I feel it is, it’s a very daunting task, but this has become my passion project. Everything I’m doing now goes toward funding The Confrontation Project or to fund the team we need to help put it together.

One of my biggest achievements was being a student athlete at UNC. I learned so much from football and my coaches and teammates. I learned that I need a team. This project is not something I can do on my own. And I learned the discipline you get as an athlete. This work is hard. Sometimes I’m banging my head against the computer. But I feel like, because of that conditioning, that mental toughness that I got in school, I can keep going. As a communications major, the biggest thing I learned has been the core idea of The Confrontation Project. There’s a lot of hate, confusion and fear between these two communities, only because they can’t communicate with each other how they feel. Messages are going back and forth, but they’re not communicating. It just can’t happen unless the communication can go both ways.

Ultimately, I hope The Confrontation Project is a way, for the first time, to take an honest look at the situation. I think with how the world works today, it’s either hot or cold, on or off, black or white. There’s no room for anything in the middle. And the media and social media have done a really good job of only letting us see and hear people who think the same way we do. But there are a lot of people who don’t think like you. And there’s a whole bunch of people who are completely ignorant to the issues that other people are facing. With this project, we can tell it in a way that people can take down their biases and their walls, take their guard down and truly see it — see these issues in a way they’ve never seen and think about how they can change to make this a better world for everybody, especially in the Black and the blue community. It’s not a new problem, but it’s a problem that can definitely go away. It just requires active participation from all involved.

Jonathan Martin invites anyone who wants to help or be involved in  The Confrontation Project to reach out.