This new course exposes students to the fundamental concepts and geo-spatial use of drones.

As technology advances, so does UNC’s faculty expertise. Two summers ago, Professor of Geography and GIS Jim Doerner, Ph.D., began the process of learning to fly drones and becoming Federal Aviation Administration (FAA)-certified as a drone pilot. This fall, those preparations led to a new course, GEOG 185: Introduction to Drones. First-year Geography and GIS students who take the course will continue to build on the concepts they learn throughout their coursework at UNC. Students from other disciplines can sample geography via the course, as well.

“Students will learn to fly drones safely and ethically,” Doerner said before the course started. “Whether they fly their drones recreationally or professionally, they’ll benefit from this course. They’ll use image-processing software and mapping technologies to create maps that can be used to analyze societal problems.”

Due to COVID-19 restrictions, Doerner had to move the lecture portion of the course online and split the 24 students between the two class days for labs. It ended up being a win: Rather than working in groups of two, students in each cohort got to fly a drone solo each time they flew the drones.

The first time they took the drones to the skies, Doerner said some students new to drones were enthusiastic, yet hesitant about the potential for crashing an expensive piece of equipment. But their confidence quickly grew. Some discovered the “fast mode” setting in the drone software. Doerner calls drone-flying fun and empowering.

“It’s a sense of, ‘Wow, I did something I was a little nervous about doing,’” Doerner says. 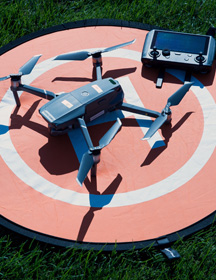 The recreational drone model used by the class, the Ryze Tello, rings in around $100 and weighs less than half a pound, which allows UNC to use drones for class without registering them with the FAA.

In addition to learning the content needed to pass the FAA test to become certified as a commercial drone pilot, students gain skills for a variety of industries — Doerner quotes a projection that by 2025, there will be 100,000 new jobs in the unmanned aircraft industry. And drones aren’t just useful for geography and GIS mapping. Drone technology, with thermal sensors, cameras and other add-ons, can be used to monitor crop health, look at heat loss of buildings, find lost hikers in search and rescue efforts, take cinematic footage for ad campaigns, survey damage for insurance companies, track natural disaster damage, aid in conservation efforts, track animal migration, monitor crowd safety, ensure fires are extinguished and more.

Because of the ubiquity of drone technology, several UNC faculty and staff across disciplines have their FAA licenses. On the academic side, they include Geography and GIS’ Jess Salo, Ph.D., Jieun Lee, Ph.D., and Chelsie Romulo, Ph.D.; Anthropology’s Andy Creekmore, Ph.D.; and Earth and Atmospheric Sciences’ Sharon Bywater-Reyes, Ph.D.

Students also learn about ethical issues: Be safe (don’t fly over roads or crowds), respect privacy (use the Golden Rule) and don’t abuse the power of aerial surveillance. In other words, mind your own business, make sure you have the rights to be flying where you’re flying and have fun.