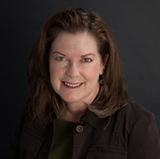 Kathleen was elected to the Foundation Board of Directors in August 2021 and serves as a member of the Nominating & Governance Committee.

In 1983, Kathleen became radio producer and reporter at KUNC-FM. She also was an on-air host for news and music programming.

Kathleen has served on the boards of Open Studios in Boulder and at Community Radio for Northern Colorado (KUNC-FM) in Greeley. She also served as board chair for both organizations.