Showcase your talent in one of the nation’s premier jazz music programs.

In its 30-year history, UNC’s jazz studies program has won more than 100 Downbeat Magazine student awards, plus a Grammy nomination. Few other Master of Music programs offer you comparable opportunities to develop as a jazz performer, composer and teacher. You’ll belong to a rich musical community that includes leaders in the world of jazz, while maturing as an artist and a professional.

UNC offers exceptional opportunities for you to perform, record and get noticed. Our award-winning ensembles have performed all over the world, including frequent high-profile appearances at national and international conferences such as Jazz Education Network and the International Association for Jazz Education. You’ll work with internationally respected faculty who excel as performers and educators, getting amazing preparation for a career in professional music—or continued study in a doctoral program.

Your Future in Jazz Studies

Graduates of our Jazz Studies master’s program have an excellent track record of career success.

Consider UNC’s Jazz Studies M.M. if you want to: 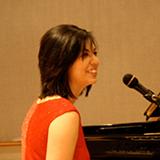 Kelsey Shiba is best known as one of Colorado’s most prolific young jazz artists. But her reputation, while richly deserved, only describes a narrow part of her talent.

Jazz remains her passion, however. After earning her bachelor’s and master’s degrees at UNC’s School of Music, Shiba returned to Greeley to teach in the jazz studies program. She now serves as executive producer of the UNC Greeley Jazz Festival, which for nearly half a century has brought together the nation’s finest artists, teachers, writers, and music students. More than 8,000 people attend this annual festival, which is the largest event of its kind in the nation.

The 2016 fesstival included headline performances by the New York Voices, Clayton-Hamilton Jazz Orchestra, and Ellis Marsalis Trio, as well as the B-3 organ master Joey DeFrancesco.

UNC’s jazz ensembles are diverse, dynamic, and renowned. You’ll perform alongside more than 75 extremely talented young jazz artists and have opportunities to connect with top bandleaders, agents and record producers. With five big bands, vocal ensembles, small combos and a jazz guitar ensemble, we showcase a wide range of talents and styles. Our students have performed throughout the United States and overseas.