Get first-rate professional training for a career as a composer and college-level educator.

Mature as an Artist, Scholar and Teacher

Recognized as an outstanding institution for graduate music study, UNC’s School of Music offers superior training for faculty positions. Our Doctor of Arts in Music with emphasis in Composition enables you to work with accomplished composers to develop your creative voice. You’ll also get advanced instruction in music pedagogy, research, and scholarship, graduating with a well-rounded skill-set that makes a strong impression on hiring committees.

UNC’s School of Music faculty includes a number of successful composers whose works have been performed throughout the world. You’ll get strong one-on-one guidance and mentoring, with encouragement to deepen and refine your own artistry. Graduates of or music composition D.A. program have an excellent track record of success, earning faculty placements at institutions that are accredited by the National Association of Music Schools.

The D.A. in music composition requires 67 to 71 hours of coursework. It includes a written dissertation and a recital of your original compositions written during the doctoral program. You’ll also get hands-on experience in college-level teaching via a supervised practicum.

Your Future in Music Composition

UNC-trained composers have an outstanding track record of professional achievement. You’ll enter the academic job market with an exceptionally versatile skill-set, including superior training in college level teaching. Widely recognized as a leader in graduate music education, the UNC School of Music has been recognized by the Colorado Commission on Higher Education as a Program of Excellence.

Consider UNC’s D.A. in Music Composition if you want to: 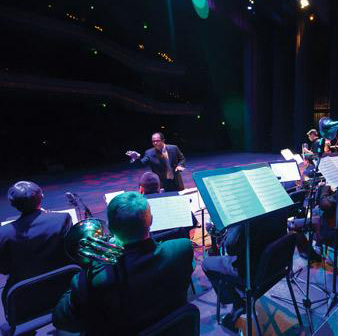 Socrates Garcia, D.A., recently returned to his native Dominican Republic for two weeks to work with students and faculty at the National Conservatory of Music in Santo Domingo. He gave a series of jazz big band composition workshops before conducting the school's big band during the local premiere performance of his composition, Dominican Suite for Jazz Orchestra, which features several Dominican genres within the jazz big band context. He also recorded some sessions for an upcoming album.

Garcia's credits include the album Yo Por Ti by Puerto Rican artist Olga Tañon, Grammy Award winner of Merengue Album of the Year 2001; musical director/keyboardist for Los Ilegales in their 1997-1998 Latin American tour; keyboardist for multi-Grammy winner Juan Luis Guerra; and guest performer with the Dominican Republic's National Symphony Orchestra, among others. He has won composition awards from the Jazz Education Network and Casa de Teatro, and is a voting member of NARAS (National Academy of Recording Arts and Sciences) and LARAS (Latin Academy of Recording Arts and Science).

UNC’s School of Music is home to an extremely active community of performers. As a D.A. candidate in composing, you’ll be able to collaborate with more than 400 extremely talented college musicians, with specializations in nearly every musical genre. Whether you’re debuting your own compositions or simply honing your skills as a performer, UNC’s ensembles add enormous value to your doctoral experience.