For detailed information about study abroad opportunities at UNC, visit the website of UNC's Center for International Education.

A two-week trip to Egypt gave nine UNC students an opportunity to learn about the complex politics and culture in contemporary Egypt, as well as experience ancient Egypt through visits to the pyramids and other landmarks.

The trip, offered through UNC's Center for International Education in conjunction with the Sociology Department and Office of Extended Studies, was organized by the Arab American Foundation for Multicultural Education and Students' Understanding, or ARAMFO.

Despite the timing of the trip, Professor of Africana Studies George Junne, one of three UNC faculty members who participated, said the group "didn't run into any problems," explaining that they were often accompanied by a guard or followed by a marked police car as a precaution, and that at the time, the demonstrations and violence-prone areas were limited and easily avoided.

Junne said he was impressed with how well-organized the program was and how much they were able to experience in a short amount of time. 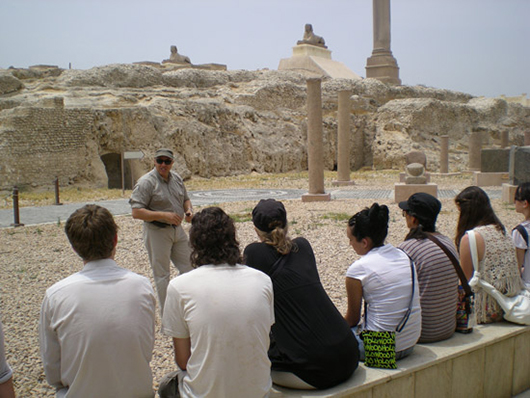 Junne also said travel experiences such as this one are incredibly valuable. "It's really important to go out and look at the world and see, as my students did, that it's all more complicated than we think," he said.

While it may seem from news reports that Egypt's divided between those in favor of the now-deposed president, Mohamed Morsi, and those against him, Junne said that he and his students learned first-hand that things are "all more complicated."

While visiting Misr University of Science and Technology (MUST), students heard many notable guest speakers that included Tarek El-Morsi, spokesperson for the Muslim Brotherhood; Nassir AlKaffas, an opposition journalist who spoke about the importance of social media to the uprising and the gradually increasing freedom of the press in Egypt; and others who addressed the relationships of Morsi's regime with non-government organizations, including many non-violent revolutionary efforts.

The group also was able to get some one-on-one time over dinner with Manal Kamal, vice minister of Egypt's Ministry of Higher Education, and Andrew Mitchell, cultural affairs officer from the U.S. Embassy in Cairo.

The students also talked with local university students and Egyptian feminists, who shared their views on everything from their goals in the revolution to the propriety of head scarves. Through these conversations, Junne said his students saw that the country is not simply divided between religious extremists and proponents of secular government or supporters and opponents of Morsi, but that there were in fact many views in between.

"The students learned that there were many truths, with a small ‘t,'" Junne said. "But no one Truth, with a large ‘T.'"

With limited safety concerns, students were able to travel all over the country to visit various historic locations and important cultural sites. Prepared with knowledge from assigned readings and guided by two top Egyptologists, the students visited the three major pyramids of Giza, Pompey's Pillar, the Valley of the Kings, the Temple of Amon at Karnak, Luxor's Avenue of the Sphinxes, and the Temple of Hatshepsut.

Junne said the assigned readings prepared students to interpret and truly understand what they were looking at when they visited the monuments, from the meaning of a statue's foot placement to the life of the pharaoh it memorializes.

UNC student Angela Ruddick said that the opportunity to see the monuments was one of the main reasons she chose to go on the trip.

"I knew it wouldn't be like other study abroad programs where you get to go to Europe," Ruddick said. "[I thought] being able to see so many ancient historical sites that we've learned about in school would be exceptional."

During their travels, students socialized with many Egyptian nationals and university students. At one point, as Junne wrote in a post-trip report, his students were on a bus traveling across town with a group of Egyptian students. They talked politics - one of the Egyptian students had actually been shot in the uprising - and just enjoyed each other's company. All of the students were talking and laughing, even singing together.

"Who would have thought that the life of the party on the bus would be the Muslim students, including the women in head scarves?" Junne wrote of the experience.

Ruddick said that meeting the Egyptian locals was one of the greatest aspects of the trip.

"The most valuable part for me would be meeting the students from MUST and hearing their viewpoints on Egyptian politics and their lives in Egypt," Ruddick said. "Every student, faculty member and community member was very kind and welcoming to our group."

In the time between information-packed lectures and tours of ancient tombs, the students stayed at five-star hotels and enjoyed all kinds of unique entertainment. They went on a dinner cruise on the Nile, swam with dolphins, visited open-air markets and rode camels.

Junne said the trip was not only a "first-class educational experience," but also a lot of fun. He said there are many, many reasons for students to consider programs like this in the future.

Notes:
Students on the trip had the option of enrolling in one or both of two three-credit classes: Social Structure of Modern Egypt and Ancient Egypt: Society and Culture. 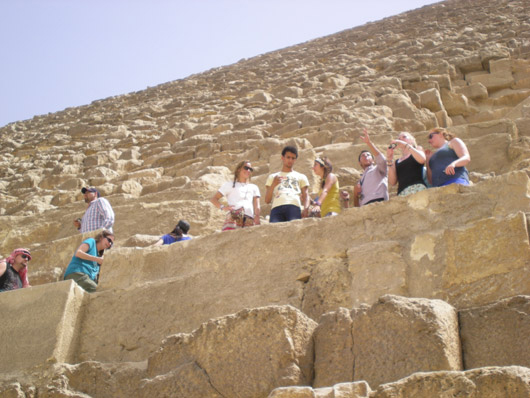