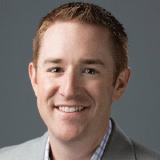 On Being a Bear

You don’t often head “south” when you make your way to the University of Northern Colorado, but an exception was made by Wyoming native and Director of Development John Paradis when he found his way to UNC. John joined UNC in 2013 as a member of UNC’s marketing team and in 2015 he transitioned to his current role in the office of development.   John works closely with UNC’s alumni and donors across the state, as well as in the Pacific Northwest, helping them to apply their philanthropic passions toward making a difference in the lives of UNC students and programs. While John spends a lot of face-to-face time with individual donors, don’t be surprised if you see in him the crowd cheering at a Bears sporting event.

John first began his career while still a college student working in athletic media and public relations for our friends up north in Laramie, WY. Now, with more than 10 years of combined higher education experience, John is helping Bears of all generations reconnect with their alma mater to advance the opportunities available to UNC’s next generation. John believes now is the perfect time for alumni and donors to engage with the university. Current projects like the Campus Commons and UNC’s investments in academic innovation are giving individuals and the broader community something to rally behind and support.

There are so many wonderful UNC stories and memories that I hear, but one sticks out as a favorite, shared with me by Virgil Hughes, Class of 1948. Virgil grew up in rural Kansas and chose UNC because it was the only school he could afford and he wanted to be a teacher. After saving for and paying his way through college, Virgil joined the Army, earned an engineering degree from Yale, started a successful business and served as a historian for Hollywood – along the way gaining more than 90 years of interesting experiences to share. When it came time to pay his UNC education forward, Virgil endowed a scholarship for current and future Bears. It is people like Virgil who make UNC so special.