Center for Women's and Gender Equity

In Kashmir’s frigid winter a woman leaves her door cracked open, waiting for the return of her only son. Every month in a public park in Srinagar, a child remembers her father as she joins her mother in collective mourning. The activist women who form the Association of the Parents of the Disappeared Persons (APDP) keep public attention focused on the 8,000 to 10,000 Kashmiri men disappeared by the Indian government forces since 1989. Surrounded by Indian troops, international photojournalists, and curious onlookers, the APDP activists cry, lament, and sing while holding photos and files documenting the lives of their disappeared loved ones. In this radical departure from traditionally private rituals of mourning, they create a spectacle of mourning that combats the government’s threatening silence about the fates of their sons, husbands, and fathers.

Drawn from Ather Zia’s ten years of engagement with the APDP as an anthropologist and fellow Kashmiri activist, Resisting Disappearance follows mothers and “half-widows” as they step boldly into courts, military camps, and morgues in search of their disappeared kin. Through an amalgam of ethnography, poetry, and photography, Zia illuminates how dynamics of gender and trauma in Kashmir have been transformed in the face of South Asia’s longest-running conflict, providing profound insight into how Kashmiri women and men nurture a politics of resistance while facing increasing military violence under India. 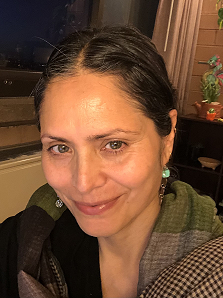 Ather Zia, Ph.D., is a political anthropologist, poet, short fiction writer, and columnist. She is an Associate Professor of Anthropology and Gender Studies at the University of Northern Colorado Greeley. Ather is the author of Resisting Disappearances: Military Occupation and Women’s Activism in Kashmir (June 2019) and co-editor of Can You Hear Kashmiri Women Speak (Women Unlimited 2020),  Resisting Occupation in Kashmir (Upenn 2018) and A Desolation called Peace (Harper Collins, May 2019). She has published a poetry collection “The Frame” (1999) and another collection is forthcoming in 2021. Ather’s ethnographic poetry on Kashmir has won an award from the Society for Humanistic Anthropology. She is the founder-editor of Kashmir Lit and is the co-founder of Critical Kashmir Studies Collective, an interdisciplinary network of scholars working on the Kashmir region.